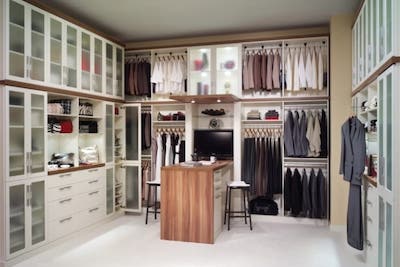 A Space for Stuff

Currently, closets are one of the key considerations in new construction and remodeling. And if you’re a homeowner planning to sell your house, a well-designed closet can greatly increase a home’s re-sale value.

According to a 2014 Angie’s List survey of more than 1,000 highly rated remodeling professionals, homeowners wanted to go big in their homes; and after years of being overlooked for showier rooms, the bathroom was poised to be the most popular remodeling project – although kitchens were still a primary focus. Below is an excerpt from the 2015 Angie’s List article: “Kitchen and Bathroom Remodeling Trends for 2015” by James Figy , which touches upon consumers desire to have […] a space for stuff.

Homeowners still want to open up their living areas by removing walls, but now they want storage to eliminate clutter, as well.

“Keeping rooms” — usually located near or adjacent to the kitchen — serve as a multi-use space to store items, or relax on a sofa and snack, do homework or watch television. While the name for these rooms originated in colonial times, the concept is still new today. Though 49 percent of contractors say “keeping rooms” are in, 11 percent disagreed, and another 40 percent asked: “What’s a keeping room?”

Contractors raised no questions about the continued popularity of closets, on the other hand: 89 percent agreed that homeowners want bigger, better closets. Cohen says consumers buy more clothes now, and since most want a master suite, they add a walk-in closet – oftentimes one per spouse.

“For new homes and homes that are going to be remodeled, that’s going to be the trend,” he says.

How Much Can My Closet Really Hold?